As a part of a somewhat larger project I have been thinking about creating a mobile Wi-Fi network that can be carried around (and later can be extended to a network of multiple routers).

As I already have a PowerBank (basically a rechargeable battery with USB ports to charge a phone on the go) it looked like the ideal solution to use this as a power source. But then after a few searches of USB powered or at least 5 volts powered Wi-Fi access-points that meet my requirements to create a secured WDS (more on this in a later post) seemed to be too high. I found a few of them but they either were ridiculously priced or were given bad reviews.

At this time I realized that I had a good old Linksys WRT54GL router laying around. As this is a fairly common model with a quite favorable hackability factor, I did a quick research and found that this might be the best device for me. The OpenWRT can be installed on this router and from software point of view it has all the features I want: WPA2 support, WDS (Wireless Distribution System – mesh, roughly), admin interface over HTTPS and is running Linux. Well, this last part was not strictly on the requirement list but hey, a device running Linux is always good to see (and opens up a lot of new opportunities).

On the hardware part I found out that the power adapter says it is supplying 12 volts and 0.5 amperes to the router. I found a few places where they told that just after the power jack there is a power regulator (a switching mode buck converter) that converts the voltage down to 3.3 volts. After taking apart I saw that this is indeed in place. Good thing about these buck converters that the input voltage range is usually wide, I found that it is about 3.7-16 volts, so it is more than suitable for my battery powered operation where the voltage drops over time when connected directly to the battery.

After finding out this wide range of input voltage I reconsidered my battery selection. Instead of using the PowerBank I decided to use a more universal solution – AA batteries. These can be found virtually anywhere and can be used for a lot more purposes when they are not used in this project. Also, hooking up 4 of them gives me 6 volts, but if I need more power then 8 of them is fine as well (giving 12 volts). Here I used 2700 mAh batteries, 4 of them gives about 13 Wh (watt-hour) power (1.2 volts x 2.700 ampere-hour x 4), 8 of them gives about 26 Wh. If the router is consuming the maximum the original power adapter can provide (6 watts) then I can use the router for 2 hours straight from 4 batteries. But I really doubt that even a peak consumption ever reaches 6 watts.

Unfortunately it seems that the barrel plug power connector is not too stable (or maybe just the one I bought was of poor quality), when moving the router around a little a momentary loss of power (and therefore a reboot) was fairly common. So… as the router was already taken apart, I have soldered a pair of wires to the main board for the power and found a hole on the bottom of the case where I could bring the cable out without having to drill it. 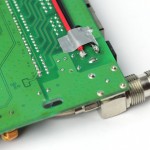 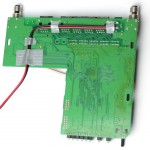 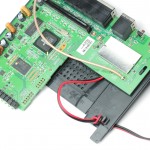 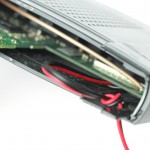 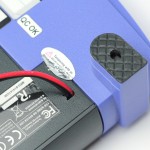 It turned out to be working perfectly in the end. 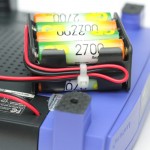 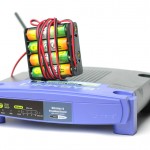 In my next post I will write about making another WRT54GL mobile and setting up a WDS (Wireless Distribution System) to extend the range of the mobile Wi-Fi network.